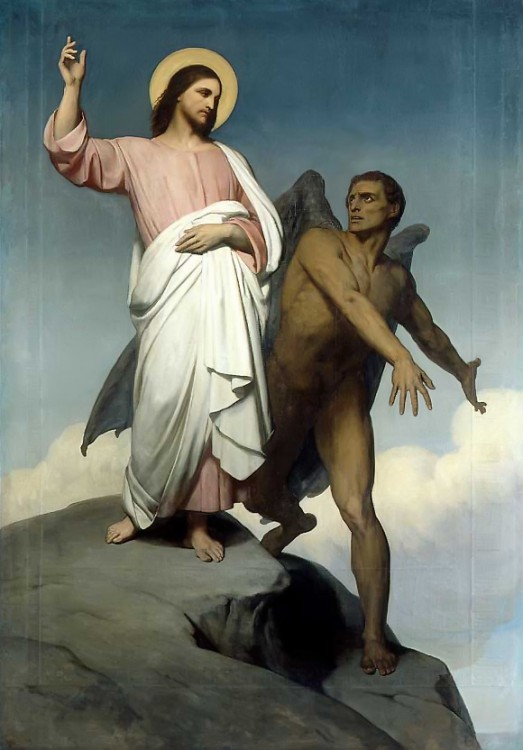 Waiting for Vindication: How Jesus' Temptation Shapes Our Approach to Apologetics

When Satan took Jesus to the top of the temple and told him to jump, he tempted the Son of God to test his Father; to get God to prove his sonship in a spectacular, unmistakable way for all Jerusalem to see. His Father had already publicly announced his sonship (Luke 3:22), but there was a real temptation here, after a physically exhausting, mind-numbing 40-day trek through the wilderness, to secure a more dazzling testimony.

But this was more than a temptation to gain recognition among peers. At the root of this particular temptation, Satan hoped that Jesus would grasp at a premature vindication. Rather than walk the path of the cross to the irrefutable vindication of resurrection and final judgement, Satan pressed Jesus to get justice here and now. “If you are the Son of God,” Satan nudged, “then get your Father to prove it.” Bypass rejection and all that relational trouble and show everyone who you really are. It may even enhance your ministry.

But Jesus, suffering but steadfast, resisted the devil’s schemes: “You shall not put the Lord to the test” (Luke 4:12). The Son saw through the temptation and recognized that requiring his Father to re-issue his heavenly pronouncement through a pointless but spectacular miracle would be nothing less than unbelief. Jesus knew his vindication would come later.

Vindication and Apologetics
Satan will also tempt us to grasp for our vindication now, rather than waiting for God to vindicate us in the resurrection and final judgment. There are many ways this temptation may manifest itself. We may be tempted to retaliate for wrongs committed against us or to find ultimate hope in legal judgments made in our favor. But there is an unexpected way Satan may wield his craftiness against us: he may tempt us to grasp for our future vindication as we practice apologetics.

If you care at all about Scripture and truth, you will often find yourself wearied by how vigorous and how often and how thorough the attacks against your faith continue to be. We live and work within an intellectual setting that undermines the very possibility of universal religious truth. We find ourselves situated within a cultural narrative that makes a plain reading of Genesis sound like nonsense and doctrines like the resurrection appear as little more than interesting mythology. So much for biblical Christianity.

As we offer the gospel to unbelievers in this setting, we may be tempted vindicate ourselves by proving beyond a shadow of anyone’s doubt that the Bible is true, that Christ is real, and that our faith is not in vain. We don’t want to be bested in an argument or be made to look like a fool. We want it to be clear to everyone that we are right.

If this desire for immediate vindication grows, we will become angry at our opponents when they present a compelling argument. We might be tempted to twist the evidence for Christianity and make claims that aren’t even true for the sake of winning a debate. We might misrepresent certain opposing positions for the sake of the gospel or retreat to personally attacking unbelievers. If we yield to the temptation to get our vindication now, we will do whatever we can to acquire it, even if it means lying about the truth. Our enemy is crafty indeed.

Overcoming the Desire for Immediate Vindication
How do we overcome this temptation? The same way that Jesus did: by faith. Specifically, by constantly reminding our hearts that there is coming a day when the whole world—every person who has ever lived—will see that what Scripture says is true as God vindicates those who believed in Christ. Our Father will show everyone that his people were right to trust in Jesus and believe the Bible as His inerrant Word.

Think of it: What would have happened if Jesus had jumped from the temple and landed safely on the ground? Like with the best, most well-reasoned apologetic argument, some people may have been stunned into silence for a time, but a few days, maybe even a few hours later, life would go back to normal and unbelief would seep back into the small vacuum created by this brief spectacle of a man flying from the top of a temple. No miracle but the resurrection could finally vindicate Jesus, and no unassailable apologetic argument can finally vindicate us. If we look to apologetics for final vindication, we will be ever frustrated and liable to temptation.

Waiting for the Resurrection and Final Judgement
God’s vindication of his people won’t come until the resurrection and the final judgement. Until then, we are called to give an answer about the hope that is in us with gentleness and reverence (1 Pet 3:13-17), to answer the fool according to his folly (Prov 24:5) (or, depending on the circumstances, refrain from answering the fool [Prov 24:4]), and tear down walls of unbelief with Scripture, wisdom, and solid argumentation. But we must remember that in this fallen world, our message will always be foolishness to those who are perishing (1 Cor 1:18) and our commitment to Christ and his Word will appear well-intentioned but uninformed at best, demonic at worst (Matt 10:25). Someday, however, God will prove once and for all that his promise was true: “Whoever believes in him will not be put to shame” (Rom 10:11). Amen. Come Lord Jesus.

[Note: I am indebted to Russell Moore’s Tempted and Tried for helping me solidify my thinking on this topic.]

One thought on “Waiting for Vindication: How Jesus' Temptation Shapes Our Approach to Apologetics”