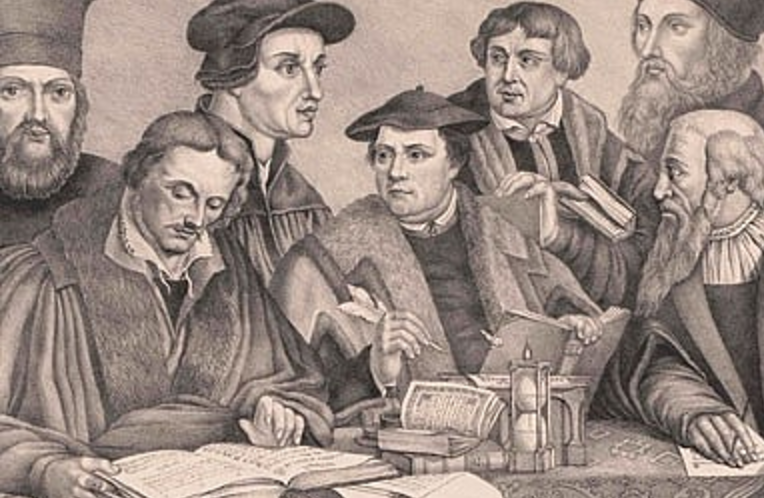 I recently finished Matthew Barrett’s God’s Word Alone: The Authority of Scripture. Even at 374 pages, it is a unique confluence of concision, breadth, and depth. I am grateful that God equips men with such theological skill and calls them to ply their craft for the benefit of the church. My heart resonates with Robert Yarbrough who, in his endorsement, called this book “a feast.”

For the last five decades, evangelicals have wrestled with the past and with one another over what constitutes a true evangelical doctrine of Scripture. Over the last seven years, I’ve had the privilege of studying some of this history and even wading into the present discussion, if only just a little. It’s become painfully clear that the disagreement among evangelicals over how to understand Scripture’s authority, inerrancy, inspiration, and clarity has only intensified the last two decades, and there is no immediate indication that the clamor of controversy will soon quiet to a din of discussion (present attempts at dialogue notwithstanding).

But the devil has again been outwitted, for controversy always gives rise to clarity. God will continue to use theologians committed to God’s Word and the Reformation’s formal principle of sola Scriptura (Scripture alone) to produce doctrinal works that have been sharpened by constant engagement with error to edify the church with life-sustaining truth. Barrett’s effort will, I trust, serve the church for many years to come.

There are countless points we could examine, but I only want to draw our attention to three: (1) the clarity of Scripture; (2) the importance of inerrancy; and (3) the connection between inerrancy and authority.

The Clarity of Scripture
One of the first things we must say about God’s Word is that it is clear. That is not to say that every part of Scripture is easy to understand; nor do we mean that clarity precludes sustained exegetical effort to grasp the meaning of the text. But we must always keep in mind that God has spoken for a specific reason: to communicate with his creatures and draw us into a relationship with him. To undermine the clarity of Scripture, therefore, is to undermine the very purpose God gave us his written word. Our minds, though fallen, do not, by necessity, bar from understanding what God has communicated. Barrett comments,

God and his universe can be and are known. From the beginning, God did not endow man with reason and sense that obstruct, distort, or blockade knowledge of him and his world; instead, they serve as the very means God uses to bring us to a knowledge of the truth (141).

Furthermore, it is God’s purpose communication with his creatures that determined how he would provide his written word. The Bible is not a compendium of abstract philosophical musings only a few intellectual elites can handle. No, God’s Word is given to all people.

[Scripture] comes to us in plain language, for God used ordinary individuals, under the superintendence of the Holy Spirit, to bring about exactly what he intended to say to his people. God had a purpose behind the delivery of Scripture, that his people might be instructed in his ways (304; see also 307).

God created our minds, our physical faculties, and human language for the express purpose of communicating with his human creatures. When we take shots at the clarity of Scripture, we are taking shots at God’s character and keep ourselves from the best thing for us: a sure word from our Creator. The same occurs when we dismiss inerrancy.

The Importance of Inerrancy
Barrett’s book is heavily researched, carefully written, and well argued. Nevertheless, for Barrett, the main problem with undermining inerrancy is that we are undermining our relationship with God.

If the Lord were ever to speak falsely, his words would be not better than the gods he competes with, gods who are mute and whose prophets speak false prophesies (Pos 115:5-7; 135:16). It is Yahweh’s ability to speak truth (and words that come true) that distinguishes him from every other religion and their god(s). Genuine believers are those who have turn away ‘from idols to serve the living and true God (1 These 1:9). And how do we know he is both “living” and “true.” By whether his Word is truth” (273).

For Barrett, the issue of God’s trustworthiness—a divine attribute that supplies the basis of the possibility of relationship—is central to the whole debate. This aspect is often lost in the atmosphere of academic dispute, and it can even be lost when evangelical non-inerrantists argue that disposing of inerrancy will actually free us to better trust God. Such reasoning simply does not square with reality. Barrett continues:

I cannot stress this enough: apart from the veracity of his divine revelation, we have nothing to stand upon, for the foundation of our faith has been removed. No longer can we know whether or not our God has spoken to us truthfully (273n32).

Barrett later quotes Peter Jenson who affirms the vital connection between inerrancy and fellowship with God:

If we are to have real faith we must have infallible words; that is, words whose truth we can rely upon absolutely and from which we do not dissent; words we can study, learn from, assimilate, use, obey and trust. These are the infallible words of God (299).

Lose inerrancy, and you will soon lose stability in your relationship with God. Slowly and perhaps imperceptibly. But surely, over time. Of course, many of those who are presently drifting further out into the sea of uncertainty claim to really like the view and revel in the adventure, arguing that inerrancy limits their hermeneutical freedom and stunts their spiritual growth. But it’s only those who are firmly anchored who can see the approaching storm and impending danger. As the expression goes, time and truth go hand-in-hand. Many of those who are throwing inerrancy overboard are also ready to be rid other vital doctrines.

The Connection Between Inerrancy and Authority
Finally, it is important to highlight the link Barrett forges between inerrancy and authority. It is vital to maintain this connection because several professing evangelicals in the last forty years have sought to preserve authority while simultaneously dismissing inerrancy. Such a move cannot be successfully accomplished, however. Ironically, it is the full-blown critics of Scripture that better appreciate the inextricable connection between inerrancy and authority. Barrett notes,

The situation worsened with the advent of the Enlightenment, Liberalism, and eventually postmodernism. The very trustworthiness and truthfulness of the Bible itself was brought into question, something Rome in the sixteenth century had not been willing to do. As we saw in chapters 2 and 3, history demonstrates that when Scripture’s trustworthiness is rejected, it is not long before Scripture’s sufficiency and authority are abandoned as well. Again, notice the inseparable and natural connection between inerrancy, authority, and sufficiency. Critics of the Bible saw no reason why they should believe the Bible was authoritative when they believed that the Bible was not inspired by God but was errant in numerous ways. To them, there could be no “Thus says the Lord” when the Lord didn’t really speak and the text that says he did speak was errant to begin with. It made little sense to them to believe the biblical text was authoritative in what it addressed and asserted when that same biblical text, they believed, was errant and uninspired. Whenever this thinking took root, the Reformation understanding of sola Scriptura was seriously undermined (287).

The suggestion that we can maintain biblical authority while jettisoning biblical inerrancy is, at basic, an illogical and unbiblical move. Without inerrancy, there can be no authority. Even those without evangelical commitments can see that.

Conclusion
Barrett’s Scripture Alone is a fine contribution to an evangelical doctrine of Scripture. Indeed, Barrett’s latest work helps us understand what it even means to hold to a Reformed—and thus, truly evangelical—position on Scripture. It is my prayer that the Lord would use this book to draw many who have found themselves caught in the dangerous currents of faulty post-modern epistemologies and the naturalistic assumptions of historical-critical scholarship back onto the safe and pleasant shores of biblical inerrancy, authority, and sufficiency.