Scripture, Tradition, and the Question of Authority

We affirm that the Scriptures are the supreme written norm by which God binds the conscience, and that the authority of the Church is subordinate to that of Scripture.

We deny that church creeds, councils, or declarations have authority greater than or equal to the authority of the Bible.

The second article of the Chicago Statement on Biblical Inerrancy (CSBI) deals specifically with the issue of Scripture’s authority. Article II affirms that the Scriptures are the “supreme written norm” to which human conscience is bound, while other written documents, although important, do not possess authority equal or superior to that of the Scriptures.

Nevertheless, in his commentary on the CSBI, R. C. Sproul notes that the statements in Article II are not meant to imply that Christians can disregard authority structures or other written norms, for “the Bible itself exhorts us to obey the civil magistrates,” and there are extra-biblical documents that are significant for the life of the church (Explaining Inerrancy, 10).  Rather, the intention of the article is to designate Scripture as the highest authority under which all other authorities exercise their authority, and that which Christians are finally beholden to obey if conflict arises between the Bible these other authorities. 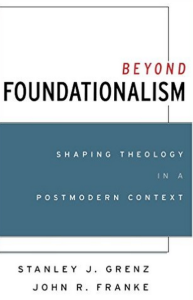 Grenz and Franke’s Beyond Foundationalism
It is concerning this issue of tradition, however, that Stanley Grenz (d. 2005) and John Franke register their concern that evangelicals have not rightly understood biblical authority in their book Beyond Foundationalism. In their view, because the Spirit is the one responsible for “both the development and formation of the community as well as the production of the biblical documents and the coming together of the Bible into a single canon” (116) the “authority of both Scripture and tradition is ultimately an authority derived from the Spirit” (117). They continue,

Each is part of an organic unity, so that even though scripture and tradition are distinguishable, they are fundamentally inseparable. In other words, neither scripture nor tradition is inherently authoritative in the foundationalist sense of providing self-evident, noninferential, incorrigiable grounds for constructing theological assertions. The authority of each—tradition as well as Scripture—is contingent on the work of the Spirit, and both scripture and tradition are fundamental components within an interrelated web of beliefs that constitutes the Christian faith. To misconstrue the shape of this relationship by setting scripture over against tradition or by elevating tradition above scripture is to fail to comprehend properly the work of the Spirit. Moreover, to do so is, in the final analysis, a distortion of the authority of the triune God in the church (117).

Although it is true that God has delivered his Word through historical means and incorporated theological tradition as a vital component for interpreting this Word, it is incorrect to place Scripture and tradition on the same plane of authority. It seems that Grenz and Franke have conflated the Spirit’s work of inspiration in Scripture with the Spirit’s work of guidance in tradition.

The Spirit’s Guidance in Tradition
Protestants have typically (with the exception of some radical groups) regarded tradition as one of the Spirit’s tools for affirming biblically faithful theological formulations and correcting wayward ones. God has used the rule of faith/canon of truth (Irenaus, Tertullian), the early creeds (e.g., Nicene, Chalcedon), the writings of Christian theologians throughout the centuries (e.g., Anselm, Aquinas, Luther, Calvin, Edwards, Bavinck, Warfield) and the development of robust statements of faith (e.g., The Westminster Confession, The Helvetic Confession, The London Confession) to help establish sound doctrine in his church and mark parameters within which it can safely practice its theological reflections.

In a very real sense, then, the Spirit is doing a genuine work of doctrinal guidance in the church for its well-being and blessing. But we can only affirm this work of guidance—and herein lies the need for a clear distinction between Scripture and tradition—inasmuch as such guidance is found to be in accordance with Scripture. The Spirit’s work of inspiring Scripture and his work of guiding the church in its theological tradition are two qualitatively different works: the former produced the very word of God while the latter serves as a tool to help the church rightly understand and affirm the teaching of that word. Peter Jenson rightly comments,

However respectful we may rightly be of tradition, which gives a vote to the past, we need to recognize that it is at its most useful in helping us to interpret Scripture. But it can achieve this role satisfactorily only if we recognize that the word of God (even a traditional word of God) must take sovereign priority over tradition, no matter how venerable the latter may be or how suitable it was for a bygone age. The sharpness of the gospel must not be compromised (The Revelation of God, 171).

These two works of the Spirit, therefore, must be kept distinct and in their proper order. Although God’s guidance in tradition and God’s inspiration of Scripture are both works of the Spirit, it is correct to claim an ontological superiority for inspiration because its final product (Scripture) is by its very nature qualitatively greater than tradition’s final product (agreed-upon theological formulations).

Not Nuda Scriptura, but Sola Scriptura
There is a growing tendency, however, especially within contemporary evangelicalism, to disregard the doctrinal consensus of the past and view tradition with a measure of distrust. Instead of using an appeal to tradition to sanction unbiblical practices, “much contemporary church life seems to suggest that we are the first Christians, and that we begin with the Bible and nothing else” (Jensen, 171).

Yet, such a mind-set toward tradition forgets that “every Christian is heir to the interpretation of the Bible that issued in the great Christological and trinitarian dogmas. These shape the very nature of our Christianity, whether we know it or not” (Jensen, 171). How important are these theological traditions? Jenson explains, “They constitute authorized, traditional ways of reading the Bible. The Bible stands over them and independent of them in principle, but every generation that passes simply confirms that they are, in essence, the true reading of Scripture and so unrepealable” (Jensen, 171).

So, while Grenz and Franke do not maintain a sharp enough distinction between Scripture and tradition, evangelicals must take care not to react in such a way so as to banish tradition from its rightful place as a God-ordained parameter within which to conduct our interpretative work. To do so actually would be to depart from our Protestant heritage. Daniel Treier comments,

The Protestant distinctive of sola Scriptura, “Scripture alone,” rejects the “coincidence” and “supplementary” views of Tradition’s relation to Scripture in favor of an “ancillary” view: contrary to popular misconceptions of nuda scriputura, tradition plays a vital role when understanding God’s revelation via Scripture, but the role is “ministerial” rather than magisterial. Scripture is the final authority over, but not the sole source of, Christian belief and practice (“Scripture and Hermeneutics,” in The Cambridge Companion to Evangelical Theology, 35).

The balance, then, is found in rightly distinguishing between how the Spirit has worked to produce Scripture and how he has worked in guiding our theological traditions. The former is superior and the latter is useful, and we can thank the Spirit for both.