Book Review: 'Jesus and the God of Israel' by Richard Bauckham 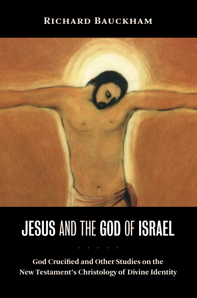 Summary
Jesus and the God of Israel is a collection of essays by Richard Bauckham that focuses primarily on the exposition and defense of the deity of Christ.  Bauckham’s approach to this doctrine, however, differs from other recent theological treatments by considering the issue of Christ’s deity under the rubric of identity rather than ontology.  In other words, Bauckham argues that the New Testament presents and maintains the doctrine of Christ’s deity by placing Christ within the identity of the God of Israel rather describing what divinity is—i.e. in terms of divine nature— and then moving to demonstrate that Christ shares in this divinity.  According to Bauckham, to assume that the New Testament authors are upholding the doctrine of Christ’s deity in terms of nature and ontology is to “misconstrue Jewish monotheism in Hellenistic terms as thought it were primarily concerned with what divinity is—divine nature­—rather that who YHWH, the unique God is—divine identity” (31).  Thus, the book proceeds by examining important related issues such as character of Jewish monotheism, the worship of Christ in the early church, the precedent of Jewish intermediary beings, Paul’s Christology, and the deity of Christ in the book of Hebrews.

Strengths
There are a number of strengths that characterize this book.  First and perhaps foremost is Bauckham’s general thesis.  Bauckham appears to make genuine headway in the realm of Christology and in the doctrine of the deity of Christ by approaching the discussion from the perspective of divine identity rather than following common Christological efforts that argue for Christ’s divinity from an ontological standpoint.  Secondly, I think Bauckham’s distinction here, between ontology and identity, is particularly illuminating for making sense of Philippians 2:5-11.  By understanding “form of God,” in Philippians 2:6 as a reference, primarily, to the Son’s status as God rather than his nature as God (although I am confident Bauckham would not deny that Paul could have in mind divine nature here as well) seems to avoid many of the problems that tend to arise when using this passage to defend the deity of Christ (What does ‘form’ mean?  Could Jesus be in the ‘form’ of God yet not share in his substance?  Did Christ ‘lose’ any of his divinity at the incarnation?).  Bauckham argues that in Paul’s mind, Christ “has equality with God and there is no question of losing it; the issue is [Christ’s] attitude toward it” (41).  Bauckham continues, “The ‘form of God’ (v.6) and the ‘form of a servant (slave) ‘(v.7), which are clearly intended to be contrasted, refer to forms of appearance: the splendor of the divine glory in heaven contrasted with the human form on earth” (41-42).  These insights, in my opinion, are particularly helpful in their own right; they also aid in demonstrating the relationship between Philippians 2:5-11 and Isaiah 53.

Weaknesses
Perhaps the greatest weakness of Bauckham’s otherwise excellent and edifying treatment of the deity of Christ is the fact that the individual chapters were not composed as a unit—they were individual essays that related to Bauckham’s general argument that were thus compiled in the present work.  One especially notices some lack of unity in Bauckham’s third chapter (“The ‘Most High God’ and the Nature of Early Jewish Monotheism”).  Although it was important to Bauckham’s overall thesis to demonstrate the nature of Jewish monotheism, he did not seem to show, explicitly, how this evidence related directly to the issue of the deity of Christ.

Conclusion
Bauckham’s work is a welcome contribution to Christological studies.  Although one might quibble over to what degree the New Testament writers are utilizing the category of identity over against the category of nature when they are describing Jesus and his relation to God, Bauckham’s book provides a massive amount of evidence to bolster any argument for the full divinity of Christ and his total equality with Yahweh of the Old Testament.  I highly recommend it!