Ministry and Perfectionism – Reflections on 'Memoirs of an Ordinary Pastor' by D.A. Carson 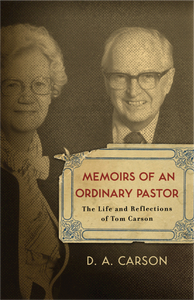 Prior to D.A. Carson’s biography of his father, few of us had ever heard of Tom Carson. He did not pastor a large congregation, he did not preside over a college or seminary, he did not leave a legacy of voluminous writings, he was not a sought after conference speaker; in a word—in his son’s words—he was an ordinary pastor. He was what many of us already are or will be in the near future. That is not to look down on those who have been gifted to shepherd and reach a large number of men and women for Christ; being unknown is no more a virtue than being well-known, and we can thank God for the gift of godly teachers he has given the Church. But the main encouragement Carson provides in this little book from the life of an “ordinary pastor” is found in the faithfulness with which his father carried out his charge, despite what appeared to be, to Tom at least, seasons of little fruit.

During his years in ministry, Tom kept a journal. Though it was more regular at certain times than at others, we are able to see into the more intimate details of the life of this ordinary pastor. D.A. Carson confesses that his father was, for the most part, a private man who kept to himself. Yet, thoughout his journals we find a man whose heart was set on faithfully carrying out the task that God had laid before him. His journal began during the last four years of a fifteen year stay in Drummondville, Quebec, when, apparently, Tom was struggling with what his son calls, “Dark nights of the soul” (61).

Tom initially began keeping a journal with a specific goal in mind: to “strengthen [his] self-disciplined use of his time.” In an early entry on Monday, November 9, 1959, he writes,

I purpose to write carefully, regularly, and fully so that my life may be weighted in the balances of my own consciousness and conscience, and by God’s grace I may eliminate the many pockets of weakness that are sapping my spiritual strength, undermining my ministry, and–let me say it—DESTROYING SOULS. God help me (77)

Tom’s spiritual intensity carries throughout many of his entries, but so does (what is often a parallel in such a case), self-recrimination for wasting precious time and opportunity. Yet, within this chapter that focuses in on Tom’s struggles with a looming sense of failure and unfrutifulness, D.A. Carson provides nine points of counsel that make this book worth far more than what you will pay for it. In these nine points, Carson examines his father’s tendency toward negative appraisals of his ministry and gives much needed admonishment and encouragement to those who also tend to view life through this kind of perfectionistic grid. Although I will not list all nine here, I do want to mention a few things that I found helpful.

Tom’s view of work partly was the product of the Great Depression: “Anything less than working all the time was letting down the people and the Lord” (92). Some of us may currently feel this way even we have not had our work-ethic shaped by the Great Depression. On page 92, Carson writes, “There is no hint in his journals or letters of the proper place of rest, of pacing himself, of Jesus’ words, “Come with me by yourself to a quite place and get some rest” (Mark 6:31, NIV). Certainly, any pastor who does not think the ministry requires diligence and who does not desire excellence in his work should probably get out of the ministry. On the other hand, we have to hear an equally important admonisment. Carson writes of himself,

It is rare for me to finish a sermon without feeling somewhere between slightly discouraged and moderately depressed that I have not preached with more unction, that I have not articulated these glorious truths more powerfully and with greater insight, and so forth. But I cannot allow that to drive me to despair; rather, it must drive me to a greater grasp of the simple and profound truth that we preach and visit and serve under the gospel of grace, and God accepts because of his Son (92)

Those of us who have a genuine desire to see fruit in our ministry yet tend toward perfectionism need to hear this word from D.A. Carson. There is always more ministry to do; and there is always ministry that we could have conducted better and with more wisdom. But even so, we do not trust in these things for our right standing with God—that has already been dealt with on a cross 2000 years ago. We are now accepted before God because of Another’s ministry—his Son’s. Although there is no way to completely eliminate these “dark nights of the soul,” for those of us who have faced or will face the difficulties of ministry, we can battle them with the gospel and persevere in faithfulness. By God’s grace, we will proceed like Tom Carson:

Dad won entrance to the only throne room that matters, not because he was a good man or a great man—he was, after all, a most ordinary pastor—but because he was a forgiven man. And he heard the voice of him who m he longed to hear saying, “Well done, good and faithful servant; enter into the joy of your Lord”

3 thoughts on “Ministry and Perfectionism – Reflections on 'Memoirs of an Ordinary Pastor' by D.A. Carson”